That’s what it says on the side of the amazing, weird, interesting, and completely unique City Slicker that was built and campaigned by an Ohio man named Lee Pendleton in the late 1970s into the 1980s. This tractor is unlike anything that has been built before or since. There are theories and ideas here that make a lot of sense, there is technology here that likely makes a lot of sense to Lee Pendleton and there is a total package that looks like nothing that the pulling world could have seen coming when the unit began to hook up to sleds during the disco era.

At base, you are looking at a tractor powered by a “sidewinder” mounted Allison V12 that wears three turbochargers, one per four cylinders, has two massive tires mounted so close together that they nearly touch, sports a classy Rolls-Royce style nose, and has a driving position that places the operator ahead of all that mess behind him. Oh… there is the last thing. The way the engine gets the power to the rear tires is via a massive chain drive and at at one point the tractor did not use a traditional hand or foot throttle but rather an electric motor that would open the blades at a set speed.

Pendleton was a man bitten with Allison fever like other famed guys like the Arfons brothers, EJ Potter, and speed freaks across the country. In fact he was friends with Art Arfons and became a crewman for him and worked on the Bonneville Salt Flats during speed runs as well as occasionally helping him with jet dragsters.

His first up close and personal driving experience was with the engines on the drag strip and how their immense power was virtually impossible to fully harness on the small, hard slicks of the 1950s. This accumulated wisdom fueled some of the design oddities built into this tractor. For instance, the electric motor opening the throttle is one of them. Using the lugged tires that he did, Pendleton believed that keeping the tire “stuck” to the pulling course was a better idea that building up all kinds of wheel speed like other guys were doing. This basic form of launch control meant that the engine could be loaded down and the thing would not run away and dig the machine into a hole.

Speaking of the rear tires, the idea between shoving them so close together was pretty basic. In the first place, he would be able to stay out of the rutted areas being created by tractors with standard width tires and in the second place he thought it was a directional advantage as the track width on dragsters was shrinking at that time for the same. reason. Weirdly, dirt and asphalt guys think alike.

The clutch used to transmit the power of the engine to the humongous chain and sprocket was of a wet design and and used multiple discs working in an oil bath environment and the oil was supplied by the shaft that ran into the clutch housing. The clutch application was handled by hydraulic pressure, not by a foot pedal or hand lever.

As mentioned, the Allison V-12 was triple turbocharged but not in the way you would expect. Each of the three turbos fed four cylinders of its own in the engine, which ran on alcohol. Pendleton believed that the combo was good for some 2,500hp back then and who are we to guess differently. We are not sure why he went this route rather than with the centrifugal blower that the engines typically used, unless he could not find a supercharged version to start with. In that case, we totally get it. Hilborn injection fed the alcohol into the engine and the guts of the thing had been modified by lightening up the pistons, balancing the rotating assembly, and beefing different areas, specifically using larger steel wrist pins in the pistons. 30 psi was about the limit for the turbos on the tractor.

In the image at the top of the page you can clearly see the massive drive sprocket and the equally huge chain that turns it. Believe it or not, that sprocket was one of the key tuning tools that Pendleton had available. He had sprockets in many sizes to vary the potential wheel speed of the tractor from really low (below 50) to pretty darned fast (above 100) depending on conditions.

After going away in the 1980s, the tractor reemerged and pulled a few times in 2012 before being put into the pulling hall of fame in Bowling Green. The videos below were taken during one appearance that the machine made in front of some local Ohio crowds. While it did not exactly set the world on fire, it put on an awesome show and it gave one last generation the ability to say, “I saw the City Slicker work!”

Lots of Lee Pendletons are gone from motorsports as the rules in virtually every discipline of mechanized competition these days have all but squeezed anything but mainstream approaches out into the cabbage. We admire guys like Pendleton because of their willingness to go off the reservation for the simple act of trying something different that they believe deep in their hearts will work.

Lee Pendleton and the City Slicker were great and it is fun for us to show you this amazing machine in anger below. 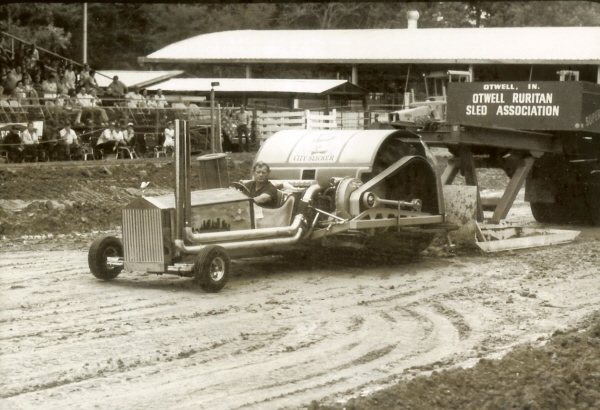 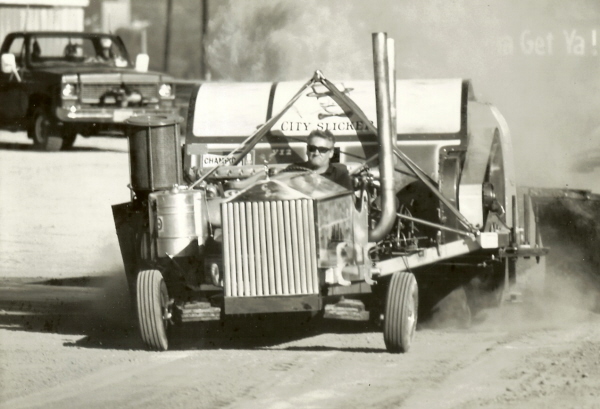